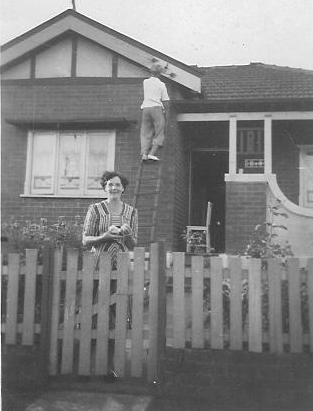 ‘Jesmond’ 15 The Causeway Strathfield South was built c.1920 as a brick interwar style cottage by local builders Goodwin and Wood of Weldon Street Burwood.  Goodwin & Wood built many of the houses in The Causeway and James Street, particularly the weatherboard cottages.  Additions were made to the house in 1955 and in 1959, the garage was added.

‘Jesmond’ was the long term home of the Crocker family from the 1920s to 1990s. The house was first owned by Arthur Crocker, Picture Show Manager and later transferred to his son, Harold.

‘Jesmond’ was formerly 16 The Causeway (as shown in the above photograph) but renumbered 15 The Causeway in 1965.  Most streets in the former Enfield Council were renumbered in the 1950s and many were reverse numbered (eg even to odd or odd to even). This house has been demolished.

The Causeway is located on the original Redmire Estate.  The street appears to have been created by subdivision and was sold as the Redmyre Estate subdivision in c.1881.  It is likely that the street name ‘The Causeway’ is reference to the nearby Cooks River.