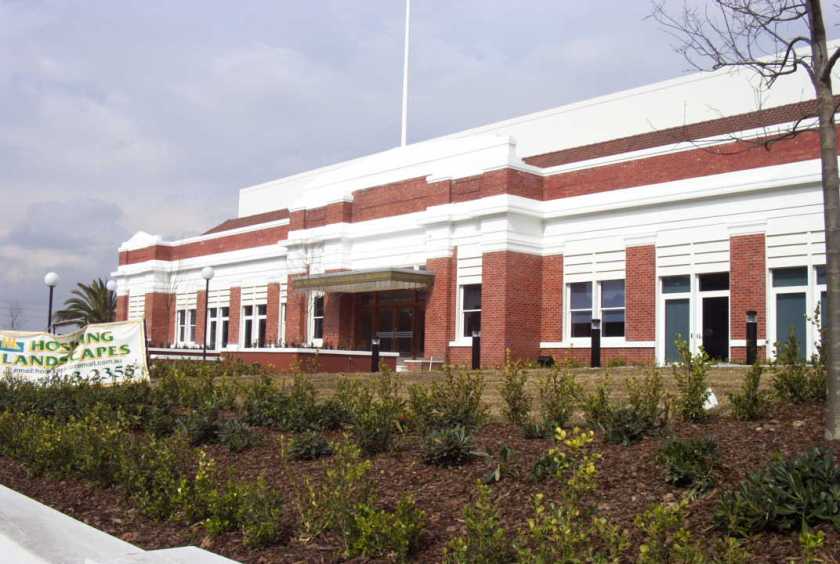 The Ford Motor Company of Canada managed the production and distribution of Ford vehicles in British Commonwealth countries which included Australia. Their first assembly plant in NSW was established at Sandown. In 1935, they shifted their NSW operations to a new car manufacturing and assembly plant at 350-374 Parramatta Road, Homebush.

The Homebush factory was designed by architects Stephenson, Meldrum and Turner and was formally opened on 31 March 1936.  A report of the opening appeared in the Sydney Morning Herald:

“The new Ford factory at Homebush will be opened to-day. Members of the company and dealers have arrived in Sydney from all parts of the State for the ceremony. The day’s programme includes a conference, a tour of the factory, and the screening in the factory picture theatre of the film, “The Ford Year.” Later each dealer will drive away In a car assembled at the factory. A dinner will be held at the Hotel Australia In the evening, when Mr. H. C. French, director and general manager, will be farewelled prior to his departure for England and Canada”.

The plant included a complex of purpose built factory buildings which were altered and added to over the years. The Ford plant was a large local employer in Homebush and surrounding suburbs. At its peak, the factory operated 24 hours a day and employed around 1200 workers on split shifts. Many homes in the adjacent Telepea Avenue were built by Ford for employees.  These have since been sold and are privately owned.

The first car produced at Homebush was the 1936 Ford V8.  During WWII (1939-1945), production shifted to the war effort including making Bren Gun Carriers and Jeeps, used in the Middle East and the Pacific.  During the war, the factory was almost entirely run by women.

After the war, the factory produced Studebakers and Diamond T models, trucks and tractors. Production in the 1960s included assembly of English cars such as Zephyrs and Consuls and US models including the Galaxie and Fairlane and in the 1970s, Escorts and Cortinas.

The plant underwent major conversion and complete redesign in 1980 and in 1981, assembly of the Laser, Australia’s top selling small car in the 1980s began with nearly 400,000 produced.  By the 1990s, falling demand and reduced tariffs levels made car manufacturing economically unviable, leading to the closure of the Factory in 1994, the last car factory in NSW.

In 1992, the council boundaries were altered and this site was transferred from Auburn Council to Strathfield Council.

The Ford Factory closed in August 1994 and more than 400 workers were made redundant.  The last car made there was the Ford Laser.

From 1995-c.2000, the site was used as a Linfox distribution centre. The site was then redeveloped as the Campus Homebush Business Park in 2005.  The façade of the former Ford Factory Building facing Parramatta Road was retained as part of the development and is heritage listed on the Strathfield Local Environmental Plan.

‘Ford in Australia: Every high, every low’, http://www.dailytelegraph.com.au/news/special-features/in-depth/ford-in-australia-every-high-every-low/news-story/c11876c090689d8e7bcdfb9b2f683b72