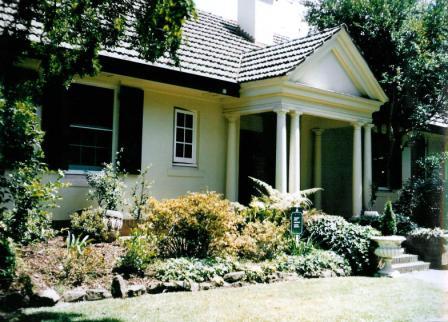 ‘Somerset’, a Georgian Revival style house, was built in 1924 for solicitor James Larcombe and his wife Hilda. This house was built on the subdivision of gardens of ‘Llandilo’, the home of Sir Phillip Sydney Jones. Both ‘Llandilo’ and ‘Somerset’ are now part of Trinity Grammar Preparatory School, The Boulevarde Strathfield. Both items are heritage listed by Strathfield Council.

‘Somerset’ was designed by B J Waterhouse of the architectural firm Waterhouse & Lake in 1923. Waterhouse is known to have designed two houses in Strathfield; Somerset, and 44 Llandilo Avenue, Strathfield. Strathfield Council’s building register in July 1923 records approval to build a brick bungalow of more than 9 rooms for owner J P Larcombe. The builder was George Pettigrew, 44 Dalhousie St, Haberfield at an estimated cost of £5000.

Somerset is considered an excellent example of an interwar Georgian Revival style house in Strathfield, which are relatively rare in this area. This single storey building is symmetrical in appearance featuring a central entrance porch and well proportioned windows with shutters. The house is gracefully situated within by extensive and well maintained gardens. The house was designed as a wing-shaped house with a central open aired garden court, adding sense of light and airiness to the rooms of the surrounding wings. The building is now used for school administration.

Hilda Larcombe, after the death of her husband, married Sir Percy Joske CMG [1895-1981]. Joske was Member of House of Representatives for Electorate of Balaclava [1951-1960]. He was also a Judge of the Commonwealth Industrial Court, Supreme Court of the ACT, Supreme Court of the Northern Territory [1961-1977]. Joske also authored a biography of Sir Robert Menzies in 1978. ‘Somerset’ was acquired by Trinity Grammar School after the death of Lady Joske in November 1990.

An auction of the contents of ‘Somerset’ was held in March 1991. The catalogue of the auction includes an extensive inventory of French and English antique furniture, fine silver, rare books and artworks by artists such as Arthur Streeton and Hans Heysen. The house was very expensively appointed and Lady Joske did a lot of entertaining and held many fundraising events and dinners for charity from the house.

‘Somerset a Home in Strathfield’, The Home Magazine, September 1924