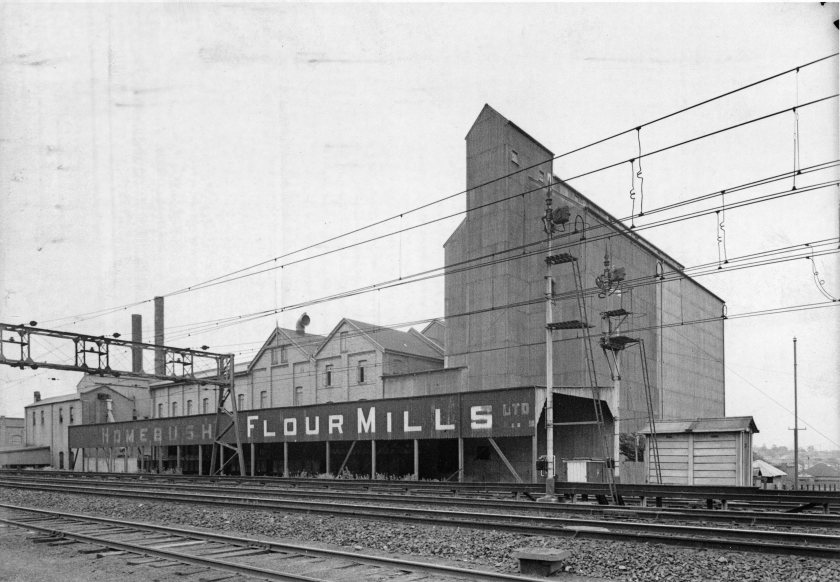 Bread was a staple food in Sydney with the first windmill built in 1807 to grind wheat into flour. With the establishment of railways, many flour mills were built in Sydney’s suburbs, including Strathfield, Homebush and Strathfield South. Rail enabled transportation of flour for production of bread and other bakery items, both for local and international markets including United Kingdom, China, Africa, Borneo and Pacific Islands.

The Homebush Flour Mills were located at Beresford Road Strathfield, near Elva Street with direct access to the railway. The large silos were a local landmark in Strathfield until their demolition for high rise unit development.

The first Homebush Flour Mill was built by Joseph Chicken in 1910.  Chicken was a well known miller with previous businesses in Victoria and Corowa NSW. Following a fire in 1912, the mill containing a four storey building and grain silos was rebuilt in 1914. Chicken’s Mill employed steam powered roller mills utilising technologies capable of producing higher quality flour in larger quantities than the older manual practices.

Ownership of the Mill transferred to the Adelaide based Jackett Brothers in 1922, who expanded the business at Strathfield. Jackett’s Red Seal Self-Raising flour was launched at the Royal Easter Show promoted by free scones and show bags containing sample bags of self-raising flour, toys for children and recipe books for their parents.

In the 1940s, ownership transferred to Allied Mills and the Mills were renamed William Farrer Mills.  International demand for flour declined from the 1950s as European countries rebuilt after WWII. The milling industry began rationalisation and closures of the smaller mills including the Homebush Mill in the late 1980s.