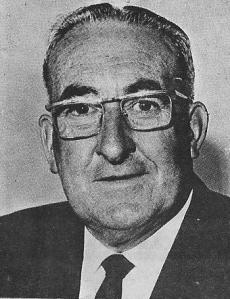 William Hamlyn Boyce, generally known as Bill, served on Strathfield Council from 1954 to 1978. He was elected to Council at an extraordinary election following the death of Alderman William. Edwards. Boyce recorded an oral history with Strathfield Council in 1993, where he speaks about the purchase of land for the Rochester St Library in early 1970’s and its’ construction. While he was Mayor a long day care centre and Southend Tennis Complex were established. Boyce also served as Deputy Mayor [1972, 1977-1978] & Local Government representative on the Sydney Farm Produce Market Authority from 1969-1978. Bill Boyce Reserve and Boyce Avenue in Strathfield are named for him.