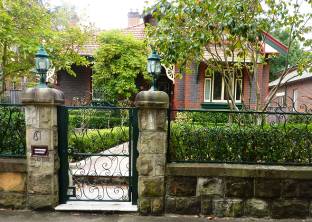 ‘Belcutha’ is located at 61 Redmyre Road Strathfield and built on Lot 45 of the Kings Estate.

Lot 45 was purchased by Sarah Isabella Dodson, wife of John Dodson, builder of Burwood in March 1907.  Strathfield Council valuation records indicate the house was built in 1907, likely by John Dodson, a prolific local builder of this period.  The house was sold in April 1908 to Annie White, wife of Alma William White, an accountant of Petersham who named the house “Vermont”.

In April 1909, the house was transferred to Frederick Henry Searl jnr, a bookkeeper of Sydney.  Searl was a member of the Searl family, notable in Sydney for their florist business.  He renamed the house ‘Belcutha’.  In 1919, Searl sold the house to Doretta Ditchfield of Wagga Wagga.  Searl built a new home at 2 Victoria Street Strathfield which is he also called ‘Belcutha’.

In 1922, Mrs Ditchfield sold the house to Edgar Poole, a solicitor of Sydney.  Poole continued to own the house until 1958 when it was sold to Thomas and Mavis Higgins, a schoolteacher and his wife.   The house was sold in 1960 to Kenneth and Isobel Anderson, a public servant and his wife.

Department of the Valuer General NSW – Valuation List – Valuation District of Strathfield 1924, 1930 and 1960