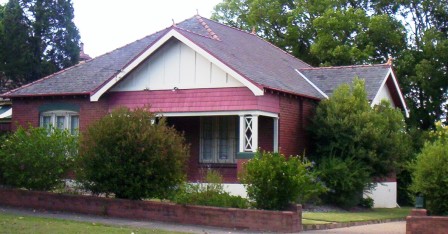 ‘Arrand’ was built in 1919 for owner Thomas Jeffrey and built on the site of the former ‘Compton Cottage’. Following the death of Sir Phillip Sydney Jones in 1919, the house and school ‘Compton Cottage’ was sold.  ‘Compton Cottage’ had been owned by Jones and was leased to his sister, Mrs Ford, who lived and operated a school at this site.  Strathfield Council minutes July 15 1919 note approval for subdivision submitted by Mr Jeffrey of part lots 15 & 16 into 3 lots.

In August 1919, a brick cottage of more than six rooms with a slate roof was approved by Strathfield Council for Thomas Jeffrey.  The builder was W Woodhead, Livingstone St Burwood at an estimated cost of £975. The house was named ‘Arrand’.

Jeffrey lived at ‘Arrand’ until his death in 1948.