In the 1930s the Free Library Movement was founded to fight to establish public libraries in NSW.  This followed the release of the Munn-Pitt report, which criticised the state of public libraries in Australia, which at the time barely existed.  Some private and community based libraries existed such as Mechanic’s Institutes or Schools of the Arts but most 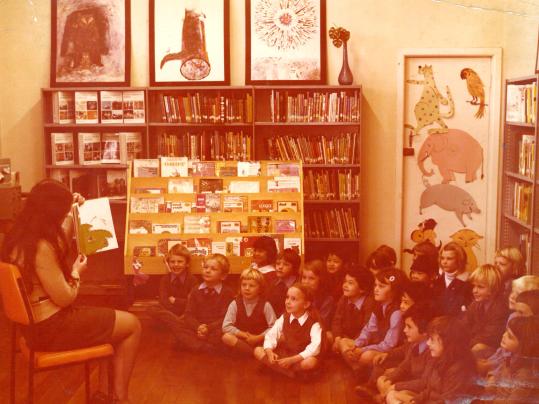 were poorly funded and with minimal collections.

In November 1939, the NSW Library Act was passed in the NSW Parliament with bipartisan support.  This landmark legislation led to the provision of free public library services for the people of NSW, via the State Library and local councils.

The commencement of World War 11 in 1939 slowed the progress of public libraries, but by 1946, a quarter of NSW residents had access to a public library.  The first local public library was opened in 1944 in Homebush, when in response to a request from the Homebush Literacy Institute, the former Homebush Council took over the Institute’s building and library at 75 Parramatta Road Homebush. Following this acquisition, the library service was then opened to the public.

In 1956, the Strathfield South Branch Library was built in the northern end of Edwards Park, at 64 High Street. The building was designed by architects D T Morrow and Gordon. The Library was dedicated as the ‘Sydney Black Memorial Library’, named for a local resident active in community organisations.  The Library was opened by the Mayor, Alderman William Dunlop. The High Street Library became Strathfield’s Central Library from 1967 to 1976.

In 1975, land was purchased at 65 Rochester Street Homebush with the intention of erecting a new Central Library.  The new two-storey library, measuring 663 m2, was officially opened by the Mayor Alderman Clarrie Edwards on 3 December 1976.  Following the library opening, the old Library on Parramatta Road closed and the High Street Library became the branch library.

By the 2000’s, the existing libraries were under significant strain with aging buildings, growing community demands and new technology requirements. Both the Central and Branch Libraries were demolished and rebuilt in the 2000s.

In 2001, a Strathfield Council Library Advisory Committee was formed with the intention of rebuilding the Homebush Library to meet increasing community needs and changing technology. The 1976 library structure was demolished in February 2003 and the new library measuring 1900 m2, three times the size of the previous library, was opened in March 2004.  The building, designed by arcitects Brewster Hjorth, was the 2004 winner of the Master Builder’s Association Excellence in Construction Award for public buildings up to $5 million.  In 2009, the old High Street library was demolished and a new community centre and library was opened.

In 2019, the High Street branch was closed as a library service.  In December 2019, the Rochester Street Library was closed for an internal upgrade with scheduled for reopening in 2020.