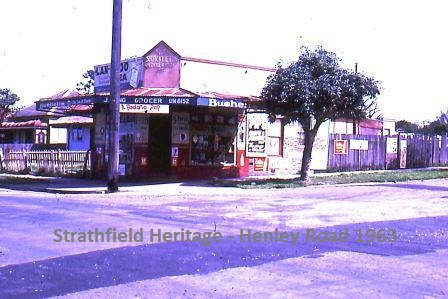 The corner shop and residence on the corner of Henley Road and Exeter Road Homebush West was  built in 1922 for Joseph William Shackleton, grocer.  The building also included the addition of the cantilever verandah at the front.  The Shackleton family operated the business until 1960 when the shop was sold to John and Mona Jung.  J Jung, Grocer is written on the front verandah with the phone number of UM8152.

This site was previously occupied by a shop. Sands Directory notes occupancy by E Byrne in 1905 and Emily Mitchell from 1911.  The shop was owned by Hugh Gordon.  Gordon was an Alderman and represented the Flemington Ward of Strathfield Council from 1893 to 1914.

The photo is dated 1963 and shows a variety of advertisements of the period for ‘Lan Choo’ Tea, Shelleys Drinks, Coca-Cola, Bushell’s Tea and Paddle Pops. Shelley’s Drinks was a NSW based soft drink manufacturer which was acquired by Coca-Cola in the 1980s and was renamed Kirks.

This building continues to trade as a corner shop.