The following homes were used as Children’s Homes and Orphanages in Strathfield.

Adelaide Walker Home was opened by the United Protestant Association of New South Wales in 1951. It was a home for infants and small children. The home closed in 1980. This house was formerly the home of Strathfield Mayor Alexander Melville and called ‘Dunrobbin’.  ‘Dunrobbin’ has now returned to private owners.

This house was originally the residence of Washington H Soul and now the location of  Jesmond Nursing Home. The photo above is Agincourt, Albert Road Strathfield. The photo below is from Sydney Morning Herald on 8 May 1929 (Source: Trove, National Library) 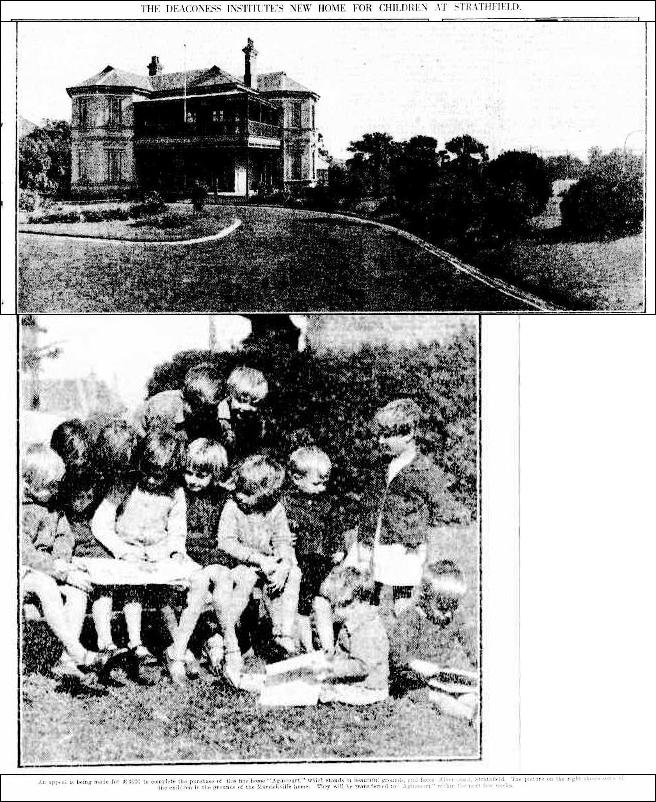 The Halloween Children’s Home, Albert Road Strathfield was set up around 1926 by a private committee.  The Halloween Home was also known as the Strathfield Home for Children and closed in 1936. This property has since been demolished.

The house Halloween at 69 Redmyre Road Strathfield was built for the Town Clerk of Strathfield Council in 1887.  This house was sold to private interests but has since been repurchased by the Council. The children’s home Halloween was located in Albert Road, not Redmyre Road, and is not the same place as the Council property.  The Council property was never used as an orphanage.

The article (right) was featured in the Sunday Times, 8 August 1926 (sourced from Trove, National Library)

In 1952, the property was bought by the Department Of Community Services and renamed “Winbin”, which in the local Aboriginal dialect, means “Children’s Home”.  The home opened in 1955 and closed in 1992. It is now again in private ownership. The house was originally called ‘Bellevue’ and was built for solicitor Ernest Laurence.

Some of the above information was obtained from CLAN, Care Leavers Australiasian Network.