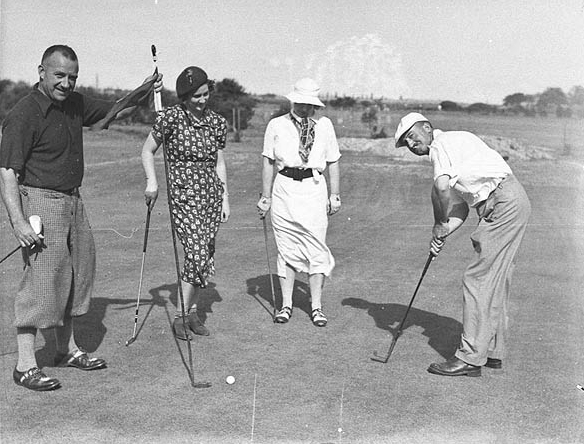 The first Golf course was 18 holes and located between The Boulevarde and Homebush Road close to Liverpool Road.  The exact location is not known but has been described as situated one mile from the Strathfield railway station.  The first committee was elected in October 1897 at the Congregational School Hall Strathfield and consisted of some of Strathfield’s most prominent residents President Dr Phillip Sydney Jones; vice-presidents, Dr T Frizell and Messrs. Miller and J. S. Brunton, committee members Messrs S A Thompson, P V Ross, Johnson, Dr. Cottre and the Rev. S. Wilkinson; and Messrs H Peden Steel and E E Garnsey, respectively as Hon. treasurer and secretary.

The Town and Country Journal reported in April 1903 on the opening of the Strathfield Golf Club Links on March 28.  The photos were taken by Captain A W Pearse and are  identified as:

The current Strathfield Golf Club site is located in Strathfield near Liverpool Road with the golf course split by the Centenary Drive roadway. On 3 July 1931, a meeting of interested parties resolved to form a new Strathfield Golf Club as a nine hole golf course on 37 acres of Freshwater Park, through a lease from Strathfield Council. The lease granted by Council required “that no respectable resident or ratepayer be refused admission to the Club”. The first President was S C Allum, who was succeeded after the first year by Ernest Buttenshaw MLA, then the NSW Minister for Lands. Buttenshaw maintained this position until his death in 1950. Upon formation of the Club, there were 121 men and 95 female members.

The club quickly acquired additional land to expand its course and auxiliary facilities. Land was firstly leased, then purchased from NSW Railways and also from private land owners. With the additional land, the course expanded to eighteen holes by 1934.

A feature of the Strathfield Golf Course is the Cooks River which runs through the section of Freshwater Park leased by the Golf Course. The presence of the river poses many challenges to maintenance of the course including flooding, soil erosion and pollution, especially litter from upstream river sources. Over 80 years, works have been undertaken by the Club to stabilise erosion of the river bank, manage pollution and improve tree and vegetation around the river.

The course has altered over time with changes in land holdings. In 1959, the Club lost 10 acres to the Department of Education to build Strathfield South High School and the building and later widening of Centenary Drive in the 1980s and 1990s altered entry to the course.

The Club more recently sold part of its land including its practice range, old clubhouse and car park for residential housing. The income raised enabled the Club to reinvest in upgrading its facilities including a new clubhouse and function centre, which opened in November 2018 and is now located on Weeroona Road.

Top photo is from the Sam Hood Collection held by the State Library of NSW and dated 1937.

See below from The Sun in 1932. In case you are wondering, no this is not me or any of my relatives!! – Cathy Jones